From A Cozy Cabin To A Country Estate

From humble beginnings in the early 1900s, this riverside property in Folsom has expanded, flooded, bloomed, and seen generations of people and pets come and go through the years. A 150-year-old, two-room log cabin predates the 5,000-square-foot home on 35 acres of lushly kept grounds. Over 300 azaleas bloom each spring, and camellia trees add color through the winter. A veggie garden is bountiful through the summer, and 14 chickens keep watch from their coop. Is there a more idyllic version of a classic southern homestead? It would be hard to top this incarnation, in any season.

Stock broker Paul “Westie” Westervelt bought the place in 1990, marrying his wife Megan on the property in 1992. The couple have raised children out here, among the expansive land and small riverside beach where they held bonfires and kayaking excursions on the narrow northern end of the Tchefuncte River. Today, all the kids are grown. Six dogs continue to enjoy the property.

Though they didn’t build the house, the Westervelts have a full appreciation for the care that was taken during the process some 40 years ago. Designed by architect Arthur Middleton, the home feels like a turn-of-the-century grande dame, even though it was built in the latter half of the 20th century. Classic elements of old doors and antique beams bring Southern character to the spaces. Deep covered porches with gracious symmetry beg a passerby to sit and sway in a rocking chair on a warm evening. 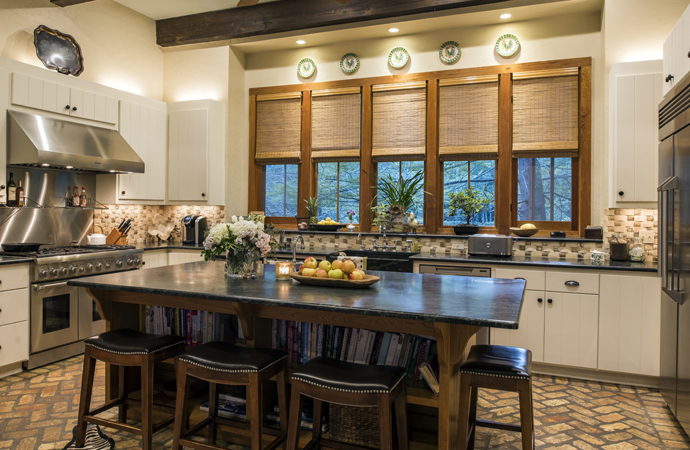 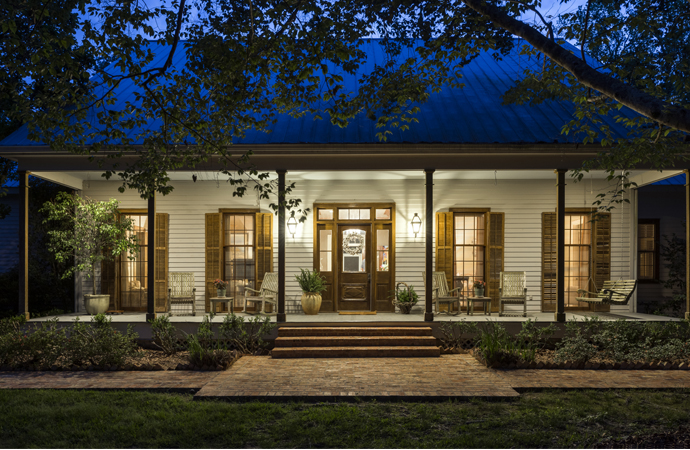 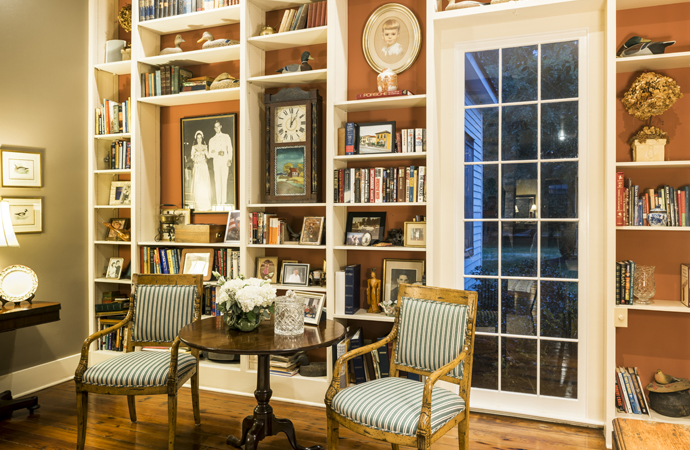 During a remodel several years ago, the kitchen was expanded from one area into an addition, leaving the former kitchen to become a combination art-and-laundry room with an overflow of appliances that are useful for holiday cooking. Soapstone counters are hardy, stain-resistant and don’t compete with the herringbone pattern of the brick floors. A bank of five windows give an expansive feel to the open-plan kitchen, and soft uplighting fills the space above the white-painted plank cabinetry. The collection of antique Italian rooster plates featured above the kitchen sink windows were in her grandmother’s Highlands, N.C. home when Megan was a girl.  Their age and patina provide a perfect foil to the simple, contemporary lines of the kitchen.

Westie has also carried a few family pieces with him into the home: the petticoat table in the foyer was in his parents’ home, and a commissioned portrait of his great-grandfather, John M. Parker, hangs in the study. Parker was governor of Louisiana in the 1920s, and the agricultural building at Louisiana State University was named for him. The portrait features President Theodore Roosevelt, a hunting buddy of Parker’s. The gravitas of the piece fills the room, as the legacy of huntsmanship fills the family room at the house. All the men in the family are sportsmen, and their trophies line the painted cedar walls. In true Louisiana style, the plank wood walls remained unpainted for decades until Megan couldn’t take the heaviness anymore. “Now we can actually see the animals!” she laughs. “Before, they just blended in to the color of the wood.”

A family friend who was a decorating enthusiast turned them on to the light neutral color Manchester Tan from Sherwin Williams, and they’ve used it throughout the house. It provides a great backdrop of balance for all the golden honey tones of the heart pine flooring that runs through the front part of the house, where various textures masterfully blend together in comfortably elegant harmony. French doors that open from room to room give an airy flow and a sense of age to the building. Gently worn wooden furniture mixes with occasional painted pieces in a well-versed balance of texture and color.

Megan, who has recently ventured into floral design, credits her grandmother, who was originally from England, for instilling a lifelong love of plants and flowers. “I would visit her in North Carolina, and we would cut flowers from her garden and bring them inside. It’s something I’ve always done,” she says. Glancing around her property, that comes as no surprise; the entire place is abundant with green foliage and seasonal flowers, which are perfect for her natural, just-gathered aesthetic. At any given time, a tabletop may bear a vessel filled with branches and leaves punctuated with seasonal blooms.

Maintaining such a storied property through the years is no small task. The elevation of the log cabin is much lower than that of the main house, and during the two river floods of 2016, the small building was filled with water. A thorough cleanout and cleanup of the petite homestead yielded an upgrade here and there, and it is now a little gem tucked into the lush woods, proving that texture, color and proportion are more important for charm than pure size.

In the most unassuming of ways, the bits and pieces of land that have been collected over the years have come together into the quintessential Southern country estate, one that has as much potential in the years to come as it has history behind it.