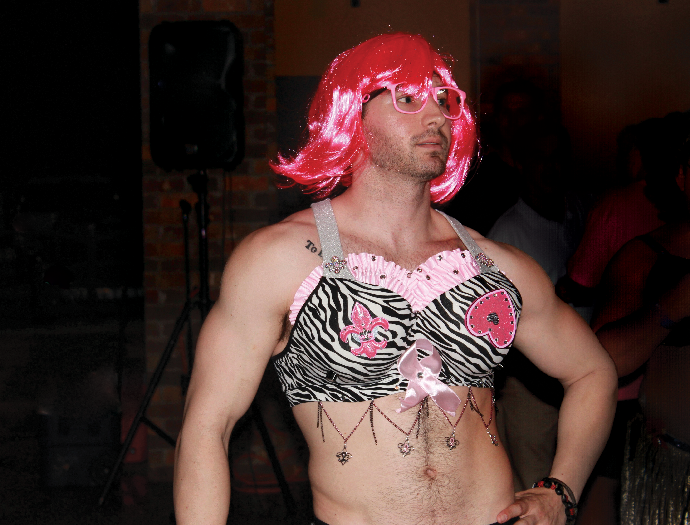 Dealing with cancer of any kind is a heavy and emotional event. So, what better way to support a cure than by having a little fun and laughing together as a community? For the past three years, the Bractoberfest event has aimed to do just that.
Bractoberfest will be held at The Barley Oak this year for the fourth time, and is promising to be another great event. 100 percent of the proceeds generated from Bractoberfest go directly to The American Cancer Society. Last year, the goal was to raise $5,000. Thanks to our sponsors who donated 13 bras and to those who participated in the event, we were able to exceed that amount, raising $6,300. This year we hope to raise our target goal of $6,500.
This event’s $20 admission includes food, Abita beer, and of course—men in bras. Bras are sponsored by teams and can range from $50 to $1,000. Each sponsored bra is decorated by its team and then modeled and put up for auction.
The creativity that the teams put into their elaborate ensembles is endless. The bras are displayed on a makeshift catwalk by male models of all shapes and sizes–and this is where the fun begins. As they are modeling, an MC presents each bra and model and talks a little about the sponsor and the bra. Teams have the option to include something special about their bra, and some teams just have a few humorous things to include. Most of the bras also come with gifts of different sorts. Party-goers are encouraged to bid and the highest bidder gets the bra… not the model.
Thanks to the money raised from events like Bractoberfest and many others supporting The American Cancer Society, along with dramatic improvements in cancer research, treatment and early detection, millions of women are surviving breast cancer today. We encourage everyone to come out to this event and be ready to bid to
“Save the Ta-Ta’s.”
Bractoberfest is scheduled for October 13, 2016 from 6-10 p.m. All models get in free and sponsorships are available until October 3. For more information on the event, please contact Jessica Lewis at 985-373-8626. To submit a sponsorship or to purchase tickets you can contact Lauren Bolles at 504-219-2273 or lauren.bolles@cancer.org.