Hong Kong, “fragrant harbor” is a pulsating international port and a melting pot of east meets west. The city assaults your senses at every corner with noise 24/7, glaring and garish signage, throngs of beautiful, gentle people pushing their way to their next stop, markets teeming with hawkers and their colorful wares, and unidentifiable exotic smells and sites.

I don’t know where to begin to describe the incredible food adventure that we recently experienced during a trip to Hong Kong and mainland China.

Guess I will begin as each day began, with breakfast.

Don’t forget that Hong Kong was a British territory from 1842 until 1997 when it was handed back to the Chinese government.

The fusion of both of these cultures is best represented in the Hong Kong style milk tea served each morning for breakfast. Milk tea is typically made from a strong Ceylon black tea to which evaporated milk and sugar is added.

We had a couple of variations of this tea when we visited the landmark café, Lan Fong Yuen, in the Central area of Hong Kong Island. We had a traditional Hong Kong milk tea iced and then also an iced coffee and Hong Kong milk tea mixture known as yuanyang. These were served with a coconut jam toasted sandwich topped with honey. Sugar overload but oh so good. 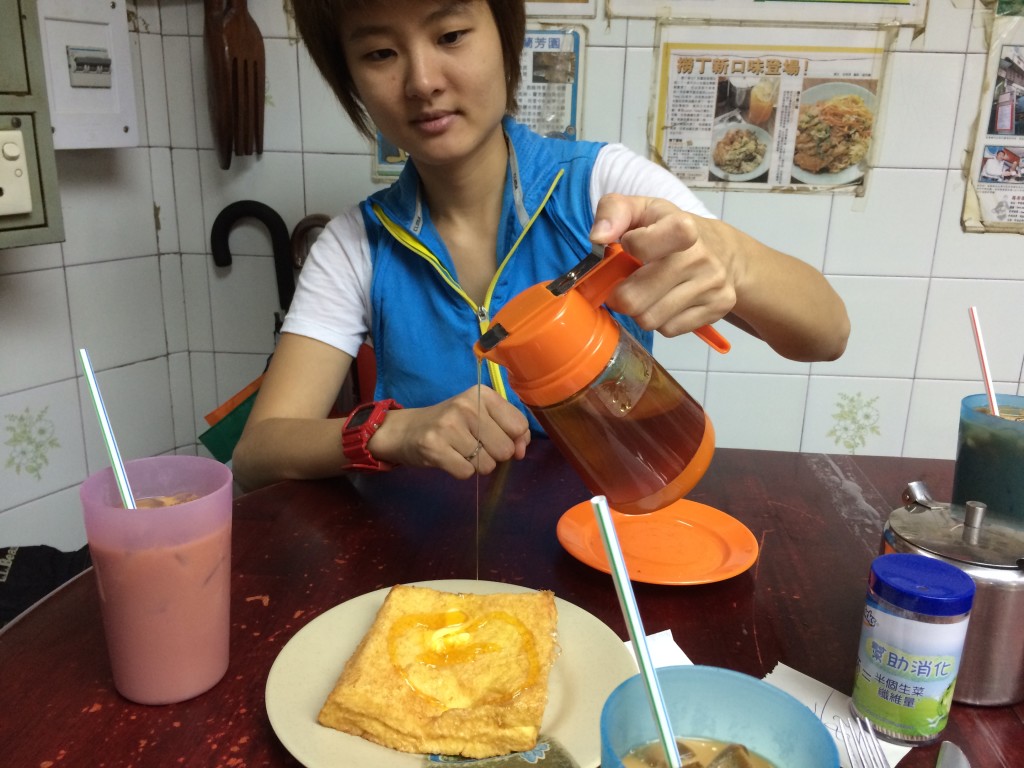 After days and nights of eating a variety of animal intestines, stomach linings, chicken feet, pig’s wrists, duck necks and other unrecognizable, ask no questions, just chew and swallow delicacies, I was longing for something mild and comforting and identifiable in the morning.

I found it! Congee. Congee is the Asian equivalent to chicken noodle soup and is best described as rice porridge. The rice is left to simmer on the stove with water, chicken or maybe fish, and aromatics until it is transformed into a velvety, smooth porridge that nourishes the body. As with most Chinese food experiences, once the congee is in your bowl, you can get as creative as you like with additions and garnishes. Try adding eggs to this mixture,  hard boiled tea eggs or 100 year old eggs, dried meats, sesame oil, soy sauce, scallions or pickled anything. There is no shortage of options. I also gravitated towards the mounds of freshly braised bok choy that were available for breakfast. Feeling a leafy green deficit, I had to get my fill in the morning before another day of overload of hot peppers and other exotic spices that threatened to send my stomach into turmoil. Dim sum “touch your heart” is served for late breakfast or what we would call brunch at 11. Multiple generations gather at the table in these noisy, chatter-filled dim sum eateries. Some of the older dim sum restaurants have waiters pushing serving trollies filled with steaming bamboo baskets of Chinese delicacies. The bottomless teapot refills your cup throughout the experience so you can wash down the dim sum bites. The dim sum pastime is also known as “yum cha” or to drink tea. Tap 2 fingers on the table after being served to express your gratitude. 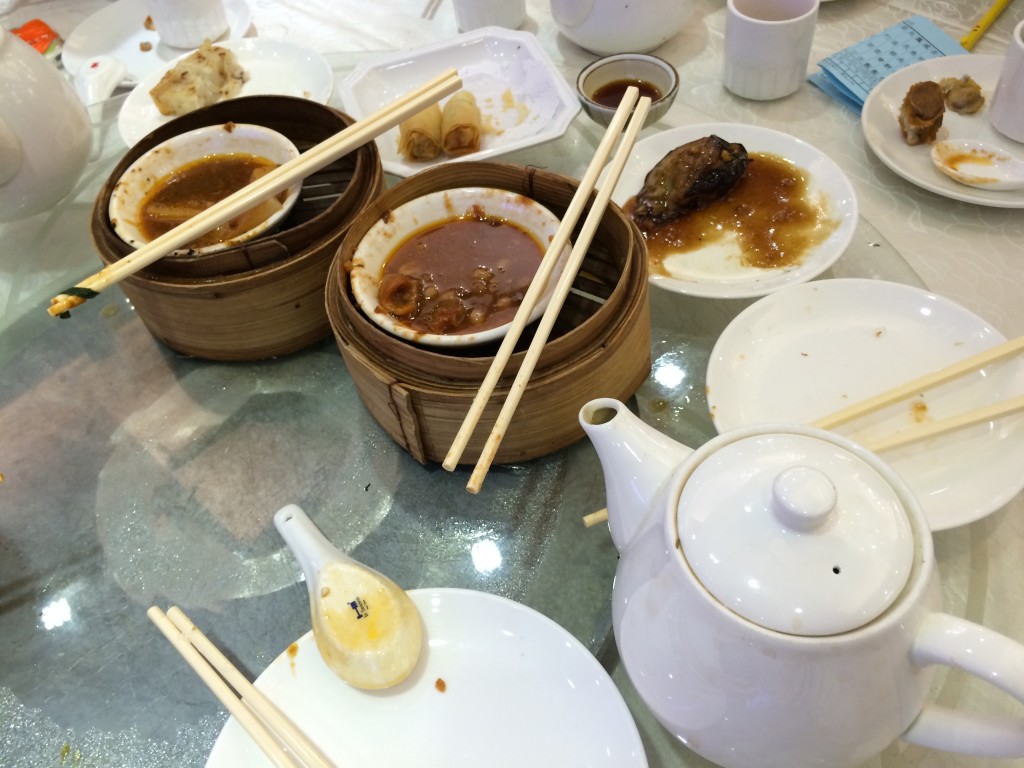 Dim sum breakfast served family style would typically include a variety of foods served from stacked bamboo steamers and placed on a lazy Susan in the middle of the table for a family style experience. A classic dim sum breakfast will usually include steamed shrimp dumplings, shao mai, an open style of dumpling that usually has pork, shrimp, scallions and ginger, rice noodle rolls and tender barbecue pork buns. Following the examples of my host, I attempted to learn the art of placing an entire chicken foot in my mouth and gently and politely manipulating it until completely cleaned of all meat and nothing is left but small bones. Think I will stick with Louisiana crawfish. I am much more adept at pinching the tails and sucking the heads! Loved the China adventure but happy to be at home…tap 2 fingers on the table to express my gratitude for the good life on the Northshore! 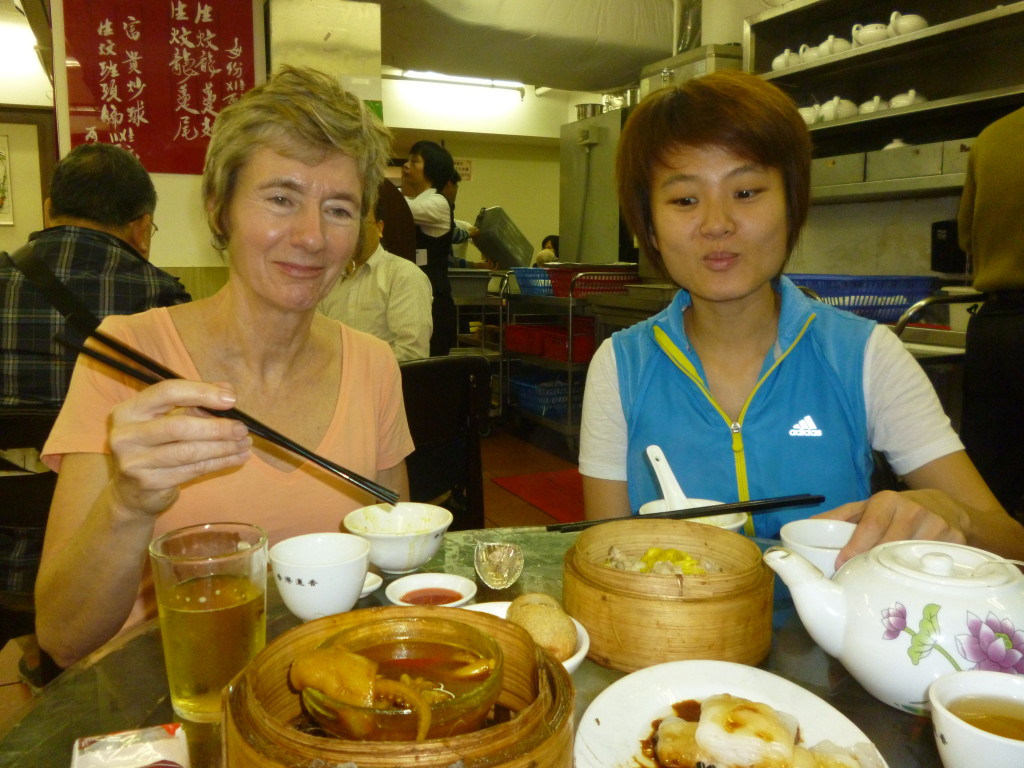